Screwing up Brexit - the stupid is a symptom, not a cause. 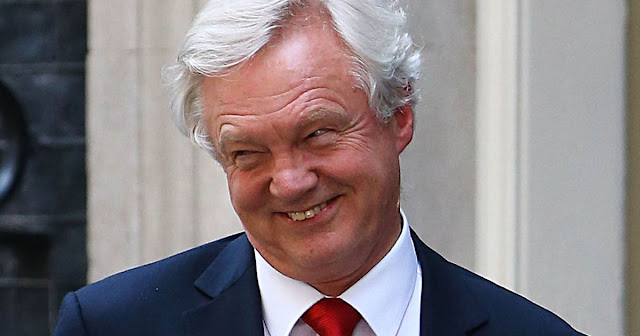 Barely a day goes by without someone intimately involved in the Brexit process saying something unutterably ignorant or stupid about Brexit. Highly educated, intelligent and experienced politicians come out with the most stupendous howlers that leave any reasonably well informed person (basically anyone who's ever bothered to Google the European Union) with their mouths open in surprise and disgust.

Before I'm accused of being a sore loser, Remoaner, gibbet-worthy traitor, etc., let me put my cards on the table - I am and have always been pro-Brexit. I wouldn't go so far as to say I've campaigned for it, unlike some excellent individuals, but I've always supported it. So, I couldn't have been happier when the Referendum was called, nor more ecstatic when it went our way.

For me, the last couple of years has been an educative experience. I've gone from being an instinctive but fairly ignorant Eurosceptic to being someone who understands a fair bit about how the EU works, and what the best way of leaving it might be. I can't claim to be an expert, but I have taken the opportunity to fill some gaps in my knowledge.

I am not a snob about this. It is a perfectly respectable and honourable thing to be anti-EU in an inchoate way. Most people are, and this is why we won the Referendum. EU membership is such a fundamental cultural, political and constitutional question that it is reasonable to say "I do not believe that the future of my country lies in that direction". It is much the same as saying "I am not a socialist because I think liberty is more important than equality". It needs no technical justification nor expertise. It is as much about emotion as reason. It is an opinion that anyone is entitled to hold, ignorantly.

I think this is also true when one looks through the other end of the telescope. It is entirely acceptable to say "I don't know much about the EU on a technical level, but I feel European and EU membership is fundamental to what Europeanness means to me. I think that Britain's future lies in the EU." Someone holding this opinion may not be able to justify it cogently, but I don't think they have to.

Ignorance, however, is not acceptable in politicians.

Of course, we elect our MPs to provide ideological guidance to a deeper state, not because of their expertise in cabbage marketing regulations. But it is not unreasonable to expect our politicians to have a certain amount of knowledge around the areas that they get involved in, nor to expect them to educate themselves where necessary. This is especially true of Cabinet Ministers, who have a small army of SPADs and civil servants to advise them. It is therefore highly objectionable that vast swathes of our political class, both on the back benches and in the Cabinet, are frankly pig-ignorant when it comes to the most important issue of our time - Brexit. 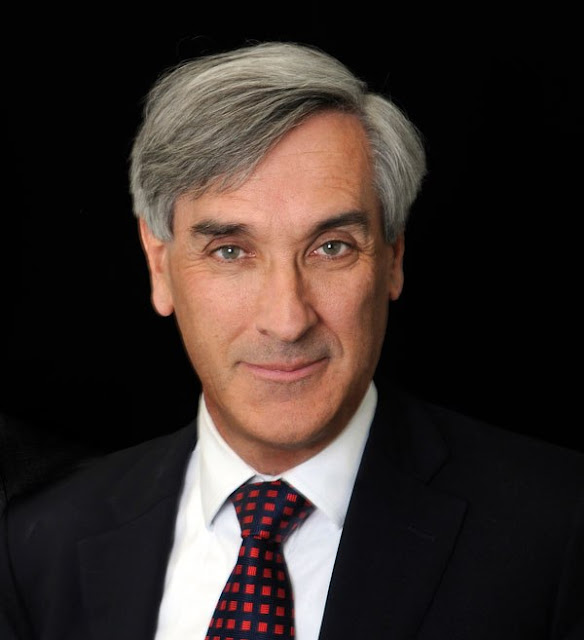 Not only does he have the slightly unnerving polish of a villain in a spy film, Mr Redwood is an incredibly clever and accomplished man. The son of an accountant and company secretary, he won a full scholarship to Kent College, Canterbury, took an Oxford DPhil, and went on to a glittering entrepreneurial career in financial services and a string of executive and non-executive directorships. He was a local councillor in the 70s and a policy advisor to Lady Thatcher in the 80s, before being elected an MP in 1987. He climbed quickly up the governmental ladder to be Secretary of State for Wales under Prime Minister Sir John Major.

So, I'm sure we can agree Mr Redwood is not stupid and not politically inexperienced. So why does he come out with twaddle like this? 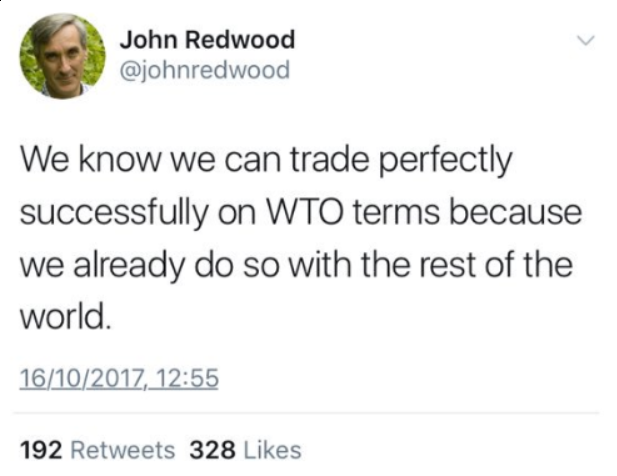 I'm not going to dissect this nonsense - finer minds have done so already - but it's truly shocking that there's not just one slip here, but onion-like layers of ignorance. Why doesn't Mr Redwood simply know more? It is his job to know what he's talking about, or at least steer clear of issues he lacks the knowledge to pronounce on.

But it gets worse.

Consider the phenomenon that is David Davis, our Secretary of State for Exiting the European Union. Of all the people in this United Kingdom who should know absolutely everything about the EU, about Brexit, about post-Brexit trade options, and about a whole host of other Brexit-related things, David Davis is number one. His job is Brexit. 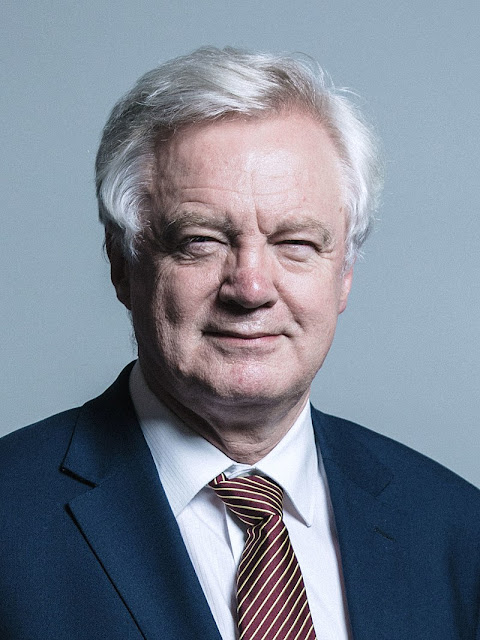 Like John Redwood, Mr Davis is far from stupid. He is from a rather humbler background than Mr Redwood (having the crippling disadvantage of being both Northern and Welsh), but this makes his ascent all the more impressive. He served in the Artists Rifles (better known as 21 SAS) before taking Joint Honours in Computer Science and Molecular Science at Warwick. He then attended the London Business School for a Masters in Business, and later completed Harvard's Advanced Management Program. Whilst at Warwick, he established a student radio station and a men's choir. Returned to Parliament in 1987, he has served in a bewildering array of governmental and shadow ministerial positions, including as Minister of State for Europe under Sir John Major (this being the office that until recently dealt with all things EU) and as Shadow Home Secretary.

And now comes the stupid. In 2016, shortly before his appointment as Brexit minister, he uttered the words:

"Post Brexit a UK-German deal would include free access for their cars and industrial goods, in exchange for a deal on everything else.

Similar deals would be reached with other key EU nations. France would want to protect £3 billion of food and wine exports. Italy, its £1 billion fashion exports. Poland its £3 billion manufacturing exports."

The fractal wrongness of this does not need explaining. Mr Davis also appears not to understand the nature or purpose of courts with supranational jurisdiction and their importance when it comes to supranational issues. It doesn't stop there. His views on Brexit are a patchwork of error, misunderstanding and thoughtless, technical shallowness. This is a former Europe Minister! It's entirely possible that Mr Davis has become less ignorant in the last year, but given how Brexit appears to be going, I'd say that's unlikely.

Messers Redwood and Davis are just two examples. I could give dozens more, from various parties, but I'd be here all week.

So, how on earth have we reached a point where our national top team makes even Jean-Claude Juncker look dignified and statesmanlike?

It is tempting to blame our current crop of fools for the multi-car pileup that is Brexit, but I don't think that would be entirely fair. As the title suggests, I think the Redwoods and Davises of this world are symptoms of Brexit, rather than direct causes of the overall twatfuckery.

John F Kennedy once remarked that student politicians fight viciously because the stakes are tiny. I think this is a pretty astute observation. Give an organisation small amounts of responsibility and power, and it will attract idlers, power-hungry shysters and those with delusions of grandeur. The briefest examination of the state of local government in the UK bears this out - it's run by jokers because it is a joke.

We see this phenomenon at the national level, too. We have spent the last 40 years merrily outsourcing all the important functions of government to a supranational body - the EU. A trade policy is one of the fundamental levers of global political power, and as an EU member, we aren't entitled to have one. Any views we may have on trade must be filtered through 27 other nations, and through a central bureaucracy that has an agenda of its own (page 32). Our leaders cannot stand toe-to-toe with the leaders of China, the USA, Australia, and talk actual business, because we are unable to agree to anything substantial without checking with the real boss.

Supporters of the EU like to point out that its member states are sovereign. Strictly speaking, they are right - Parliament could repeal the European Communities Act and all the EU's formal power over us would dissolve. But everyone knows the consequences of doing so would be so ruinous as to make such action impossible, so the sovereignty is meaningless. One might argue that Texas is sovereign because the Texas State Guard answers to the governor, but try using the TXSG to invade Mexico and see how sovereign you are. The United Kingdom is not in cooperation with 27 other states - she is subordinate to the same body as them. At a global level, the British Government does not play in the big boys' playground.

Our politicians don't really have to do statecraft in the way they used to, as a higher body does all the important stuff. They don't know or care about trade policy because they've never had to do so. And when you don't do statecraft, you cannot expect your system to produce statesmen.

In my view, this has had an infantilising effect on British politics. The fact that the British Government isn't really a proper government means that the few bright and motivated people it attracts quickly become lazy and indifferent. This in turn makes the people resent their political class and creates an environment in which nothing ever changes. Our MPs treat Parliamentary debates as ways to get themselves on the telly, and our media outlets are only too happy to indulge them (witness their fawning over the Scottish Nationalist MP Mhairi Black, who is so incredibly bad that it's physically painful to watch her speak).

Brexit will be cathartic in this regard. It's already doing us a favour by showing up the uselessness of the current crop. Their idiocy, idleness and ignorance is plain for all to see. Once our governments are forced exercise the full powers of statecraft, our political system will begin to attract good people with good ideas.

In the meantime, sit back enjoy the ride. 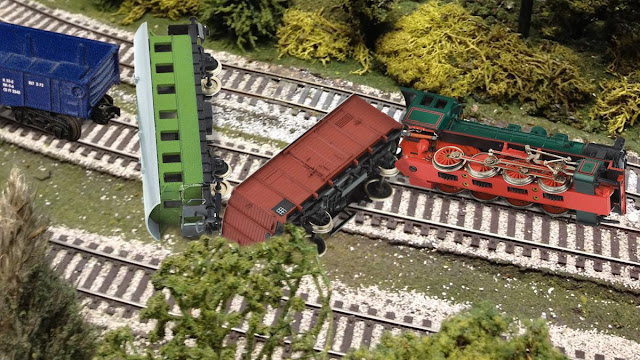